Decanting – why do we do it? 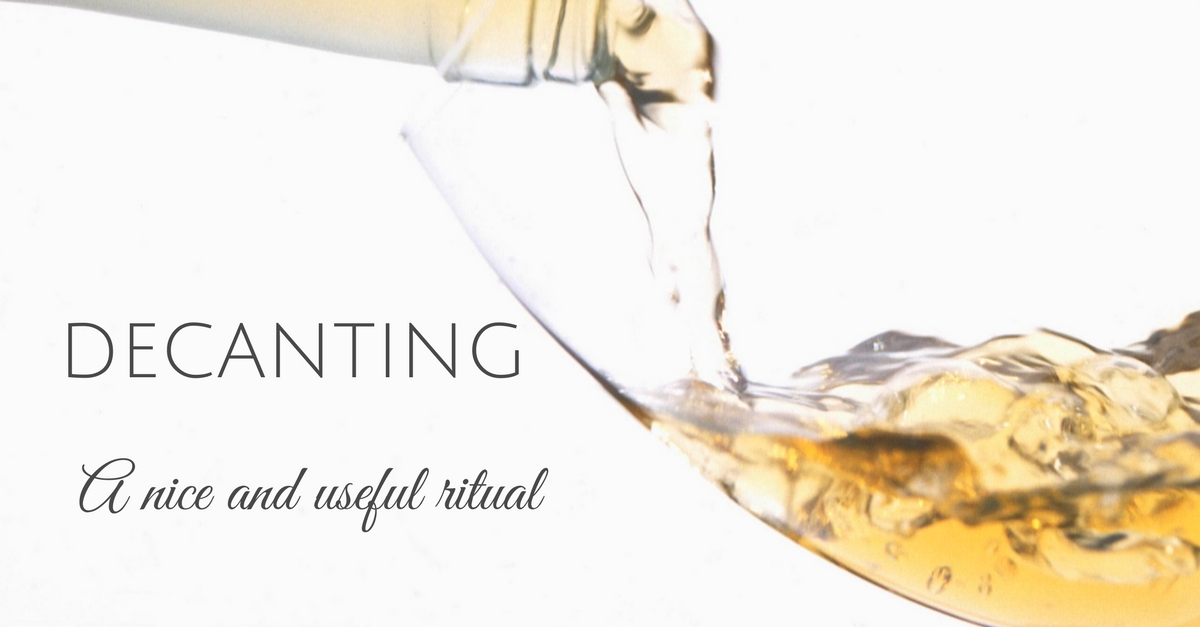 Recently, my uncle from northern Germany went visiting us. With his 80 years of age he is a distinctive gourmet and wine enthusiast… and very much into enjoying Bordeaux wines. To get to the heart of it: he almost only drinks Bordeaux wines.

My uncle joined us for dinner that evening. So I got a really nice bottle of 1995’ Bordeaux from our wine cellar, served some delicacies and set the table with nice wine glasses. Everything was prepared and I was about to pour the wine into the glasses. This was the starting point of a heated discussion…

It seems like serving a wine is easy and straightforward. Just open the bottle and pour the wine into the glass. But anyone who has ever listened to a debate about wine should “breathe” before drinking or who has struggled with a crumbling cork, knows it better. It is not as simple as it looks like. Decanting remains a bit of a mystery.

Let’s gather some facts about decanting and why we should or even not do it.

Decanting wine is basically the act of pouring wine from one vessel (usually the bottle) into another vessel (usually a decanter). Typically, the wine is then served from the second vessel, the decanter.

Why do we decant?

Old and mature wines produce a lot of sediments as they age. If the sediment is mixed with the wine it can impart a bitter and astringent taste and a gritty texture. This is not harmful but definitely less pleasurable. Slow and careful decanting ensures that the sediments stay in the bottle and that you have a clear wine in the glass.

A second reason to decant wine is to get a bit of air into it. As the wine is poured slowly from the bottle to the decanter it takes oxygen, which helps open up the aromas and flavors.

With decanting older wines (especially 15 years old or older) you need to be very careful. Old wines are often fragile and could suffer from too much oxygen and fall apart. Therefore, it is important to decant old wines only short before drinking. Additionally, a slender carafe is recommended for old wines to avoid that the wine has too much contact with oxygen.

The situation is different with young wines. They’ve had only little time to ripen and unfold its full aroma within the bottle. So, an oxygen shower can work wonders. Especially young wines that are tight or closed on the nose or palate as well as highly tannic and full-bodied wines such as Cabernet Sauvignon or Syrah benefit from decanting. The shape of the carafe should be more open and wide to get as much oxygen as possible. Unlike than with older wines you can decant young wines hours before drinking. A young Barolo wine for example can be decanted also the evening before.

How you should decant an (old) wine

The bottle should be upright for several hours before drinking, so the sediments can shift to the bottom of the bottle, making it easier to separate it.

The wine is now ready to serve.

And by the way, don’t forget to put the empty bottle of the precious old wine on the table, so that your guests can see what nice wine you have served!

Many people don’t use decanters because they fear the cleaning work after having used them.

A renowned star- cook and restaurant owner once gave me the hint to never use soap or detergents when cleaning decanters and even wine glasses. The reason is that it is very difficult to remove all remains of the detergents, which adversely affects the flavors of a wine. So to be safe, since then I only use hot water and clean my decanter straight after use (never leave wine residues dry in the decanter). Which works indeed very well!

If pure hot water once shouldn’t help, try this simple trick: Take a teaspoon of baking soda, half a cup of apple vinegar and a cup of hot water. Pour everything together in the decanter and swivel the mixture for several minutes. Then leave inside for about 15 minutes and swivel it again. After 20 to 30 minutes all spots and stains have disappeared. Don’t forget to rinse the decanter afterwards for several times with clear water to remove the smell.

Since the dinner with my uncle and some new insights- I decant most of my wines. I guess everyone should find out if and which wines to decant. If you are curious, experiment for yourself with various bottles of the same wine, some decanted and some not and see which you prefer.

» News » Decanting – why do we do... Previous post:
The secret of „Everyday Wines“ Next Post:
Top 10 Wine Producing Countries of the World